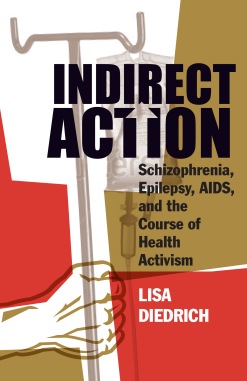 The interconnectedness of illness, thought, and activism in the prehistory of AIDS

The experience of illness (both mental and physical) figures prominently in the critical thought and activism of the 1960s and 1970s, though it is largely overshadowed by practices of sexuality. Lisa Diedrich explores how and why illness was indeed so significant to the social, political, and institutional transformation beginning in the ‘60s through the emergence of AIDS in the United States. A rich intervention—both theoretical and methodological, political and therapeutic—Indirect Action illuminates the intersection of illness, thought, and politics.

Not merely a revision of the history of this time period, Indirect Action expands the historiographical boundaries through which illness and health activism in the U.S. have been viewed. Diedrich explores the multiplicity illness-thought-politics through an array of subjects: queering the origin story of AIDS activism by recalling its feminist history; exploring health activism and the medical experience; analyzing psychiatry and self-help movements; thinking ecologically about counter-practices of generalism in science and medicine; and considering the experience and event of epilepsy and the witnessing of schizophrenia.

Indirect Action places illness in the leading role in the production of thought during the emergence of AIDS, ultimately showing the critical interconnectedness of illness and political and critical thought.

Treatments: Language, Politics, and the Culture of Illness

Creative expression inspired by disease has been criticized as a celebration of victimhood, unmediated personal experience, or just simply bad art. Despite debate, however, memoirs written about illness—particularly AIDS or cancer—have proliferated since the late twentieth century and occupy a highly influential place on the cultural landscape today.
In Treatments, Lisa Diedrich considers illness narratives, demonstrating that these texts not only recount and interpret symptoms but also describe illness as an event that reflects wider cultural contexts, including race, gender, class, and sexuality. Diedrich begins this theoretically rigorous analysis by offering examples of midcentury memoirs of tuberculosis. She then looks at Susan Sontag’s Illness As Metaphor, Audre Lorde’s The Cancer Journals, and Eve Kosofsky Sedgwick’s “White Glasses,” showing how these breast cancer survivors draw on feminist health practices of the 1970s and also anticipate the figure that would appear in the wake of the AIDS crisis in the 1980s—the “politicized patient.” She further reveals how narratives written by doctors Abraham Verghese and Rafael Campo about treating people with AIDS can disrupt the doctor–patient hierarchy, and she explores practices of witnessing that emerge in writing by Paul Monette and John Bayley.
Through these records of intensely personal yet universal experience, Diedrich demonstrates how language both captures and fails to capture these “scenes of loss” and how illness narratives affect the literary, medical, and cultural contexts from which they arise. Finally, by examining the ways in which the sick speak and are spoken for, she argues for an ethics of failure—the revaluation of loss as creating new possibilities for how we live and die.

Genealogies of Disability, Guest editor for a special issue of Cultural Studies 19, No. 6 (November 2005).

“Comics as Pedagogy: On Studying Illness in a Pandemic,” Rapid Responses: Comics in and of The Moment, Comics Grid: Journal of Comics Scholarship 12, No. 1 (April 2022), 1-9.

Review of Olivia Banner, Communicative Biocapitalism: The Voice of the Patient in Digital Health and the Health Humanities (Ann Arbor: University of Michigan Press, 2017) in Literature and Medicine 38, No. 1 (Spring 2020), 211-214.

Review of Susan Merrill Squier, Liminal Lives: Imagining the Human at the Frontiers of Biomedicine (Durham and London: Duke University Press, 2004) in Journal of the History of Sexuality 15, No. 3 (September 2007), 512-517.