It was lovely to spend a weekend in Dundee, Scotland for the Graphic Medicine Conference at the University of Dundee. Despite coming on the heels of the Brexit vote (or perhaps because of–Scotland voted overwhelmingly to remain in Europe), the city and university provided a perfect location for doing graphic medicine. The University of Dundee is home to the Scottish Centre for Comics Studies and the vibrant DeeCAP (Dundee Comics/Art/Performance) scene. Participants were treated to fabulous keynotes (by Elisabeth El Refaie, Al Davison, and Lynda Barry, who also taught a comics and writing workshop with Dan Chaon). Check out the #stagespages hashtag on Twitter. 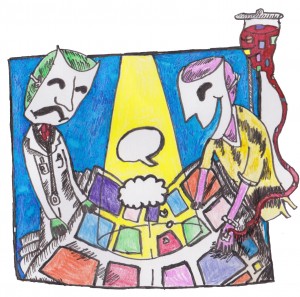 I presented on a panel with Ariella Freedman (Concordia University), Andrew Godfrey (University of Dundee), and Sarah Hildebrand (CUNY-Graduate Center). Andrew was one of the main organizers of the conference and created the fabulous image for the conference above.

Our panel,”Performing Illness,” blended the theoretical and the personal in order to reflect on “illness as performance” in graphic narratives. Calling attention to both form and function, we analyzed how the genre shapes and is shaped by the experience of being ill, and how we might more critically engage with Graphic Medicine by making our own readings more performative. We asked: If comics are indeed stages upon which authors perform their illness, how might Graphic Medicine be used as a filter through which to view and respond to other people’s experiences, as well as our own? How might the subject “become” through drawing? And how might a better understanding of the performativity of patienthood help us break down obstacles to care?

Below is the abstract to my paper, “Drawing en abyme: staging illness and identity in graphic narratives” (for the sake of time, my paper focused mostly on drawing en abyme in Alison Bechdel’s Are You My Mother?). 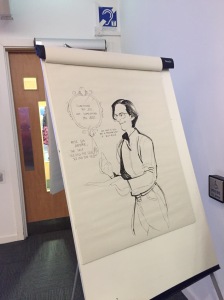 In a reading of Jacques Derrida’s use of the concept of mise en abyme[1] as a “fundamental operation of the text” that is “synonymous with textuality” itself, art historian and critical theorist Craig Owens argues that what the mise en abyme does is show how representation is staged in the text.[2] For Derrida, the mise en abyme stages the staged-ness of textuality—textuality en abyme. With this double operation in mind, Owens discusses photography in general and several photographs with mirrors in particular—a “photography en abyme,” arguing that what is depicted in such photographs is not some truth of identity, but “the process of becoming self-reflective.”[3] I want to extend Owens’s extension of Derrida’s use of the concept mise en abyme in order to explore the double operation of what I call drawing en abyme in graphic narratives. Graphic narratives work formally to deconstruct subjectivity in general and the experience of illness in particular. By emphasizing the subject as becoming through drawing, graphic narratives work to render the subject not as something one is, but rather as something one does, in relation to nonhuman objects and other human subjects.[4] Through particular formal elements, including drawing en abyme, graphic narratives demonstrate the ongoing and recursive processes of subjectification and de-subjectification. In this paper, I will explore in particular the way the representation of illness and identity is staged through the doubling of mirrors, photographs, and other imaging technologies in the graphic narratives of Lynda Barry, Alison Bechdel, and Brian Fies.

[1] According to the OED, the phrase “mise en abyme” describes the heraldic device in which a shield includes a smaller version of itself at its center. Andre Gide borrowed the term from heraldry to suggest the device of self-reflection in psychological novels.

[3] Ibid, 22. Owens discusses Brassaï’s “Groupe joyeux au bal musette” (1932), Lady Clementina Haywarden’s “At the Window” (c. 1964), and Robert Smithson’s series “Yucatan Mirror Displacements (1-9).” In his essay, Owens is interested in historicizing the device of photography en abyme in relation to the changing understanding of subjectivity in modernity and postmodernity. Although beyond the scope of this essay, I find Owens’s analysis useful in contemplating the concept of self-reflexivity expressed in the age of the selfie.

[4] I am, of course, drawing on Judith Butler’s theorization of gender as something we do, and are compelled to do, not something we are or have as a kind of attribute, as first articulated in Gender Trouble: Feminism and the Subversion of Identity (New York and London: Routledge, 1990). I am also drawing on the work of Annemarie Mol, who describes illness as “something being done to you, the patient. And something that, as a patient, you do,” The Body Multiple: Ontology in Medical Practice (Durham and London: Duke University Press, 2002), 20.